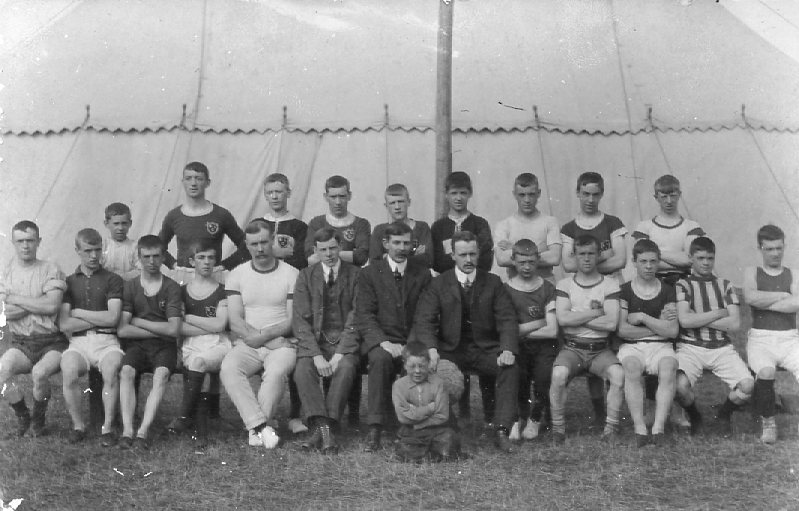 Wish You Were Here > Find Me

Groups either – organised or not – were a favourite with commercial photographers. They offered interest, enhanced composition and faces on cards would sell which then gave the opportunity to send it along with a ‘pick me out’ message.

Children pose for the camera as the factories turn out. Elizabeth Jane (Janie) was living with her husband, child Jack, sister-in-law and widowed mum nearby. She was in her mid-20’s when she posted the card. Photographed and published by Richard Broughton of Woodbine Studios, Burnley, a sequence of photographs (No 1, 2 ,3, 4) followed as workers passed. See also https://www.ebay.co.uk/itm/pt0715-Dinner-Time-Ashfield-Road-Burnley-Lancashire-photograph- 6×4-/392151299967

Jack is right of the stall.
Aunt was housekeeper to a young widower whose wife in her 20s and young children, age one and two had died within nine months of each other.

Hoops seem the essential toy and the poster says miners were opposed to the eight-hour day (they achieved this in 1908.) Opposition to it reflected the historic division within the trade union which would last well into the 20th century.

Many men going off to war had their photograph taken at a local studio. Fresh faced Eric Crummett from Burnley had grown up a bit by the time of the second picture where he is marked with the left hand ‘x’. The studio portrait was used in his obituary notice in a local newspaper after his death in 1917, age 20.

The Burnley men were one company of the Accrington Pals. The cards were posted by Sid to his sweetheart Lily. Sid was badly wounded on that fateful day in July 1916. He survived the war and the couple married in 1920.

The Accrington Pals was a locally raised battalion of soldiers at the start of the Great War. Two companies were provided by Accrington with one each by Chorley and Burnley. The principle was that men who were friends (‘Pals’) joined to fight with others from the same factory, street or club. This offered a sense of comradeship and unity. So, members of Burnley Lads’ Club, who already had a sense of ‘belonging’, would follow the leader of the club into the army without much hesitation. Leader HD Riley is recognisable in the centre of the large group but, as with many cards, the boys from BLC are not named. They knew who they were…