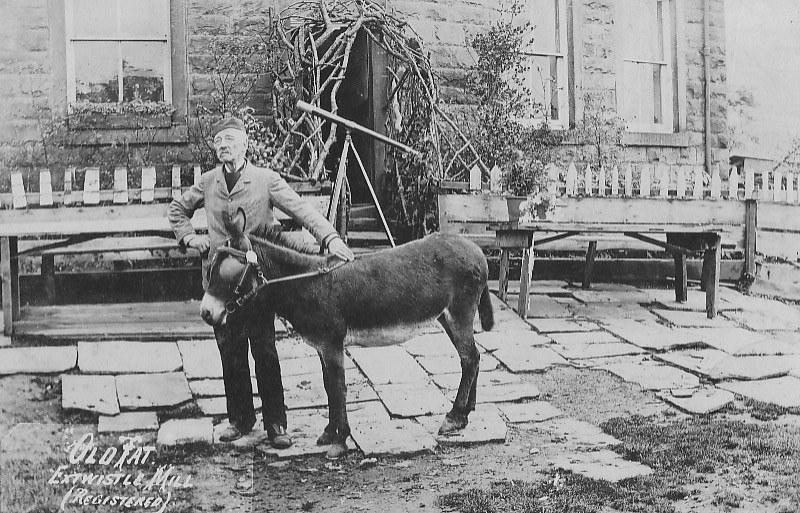 Wish You Were Here > People

‘Characters’ abounded in the town and Elizabeth was frequently seen in the Manchester Road area. Often given nicknames as a form of affection rather than derision hers was Lady. Postcards on sale in the shop window include Towneley and Extwistle Halls.

The ‘Sage of Roggerham’ was almost a legend in his own lifetime with his writing, lectures and local knowledge.

Comrades from the East Lancashire Regiment, c1915. Albert Cheesbrough is second from the right. Albert was killed in action in 1915.

John and Ruby enjoy a cuddle at Blackpool 2nd August 1940. The couple had married the year before. John was killed in action in 1945.

The cottage homes on Salus Street were built on land given by Sir John Thursby in memory of men from the East Lancashire Regiment who had died in the Boer War. They were part of a national scheme to provide rent free homes for soldiers.

Barbara Melvin was the town’s cotton queen in 1932. She worked in a Padiham mill and millworkers chose someone to represent their town in a final at Blackpool where a Lancashire queen was selected. Her role was to try and raise the profile of the cotton industry to try and bring work back to Lancashire.

The ‘Greens’ of 1905/06 doesn’t have the same ring as ‘Clarets’. That nickname came in 1910 when the playing strip changed. The club was gradually building to be a powerhouse of English football climaxing with that day in April 1914 when they brought home the Cup. Even a crowd at Blackburn railway station cheered as the team passed.