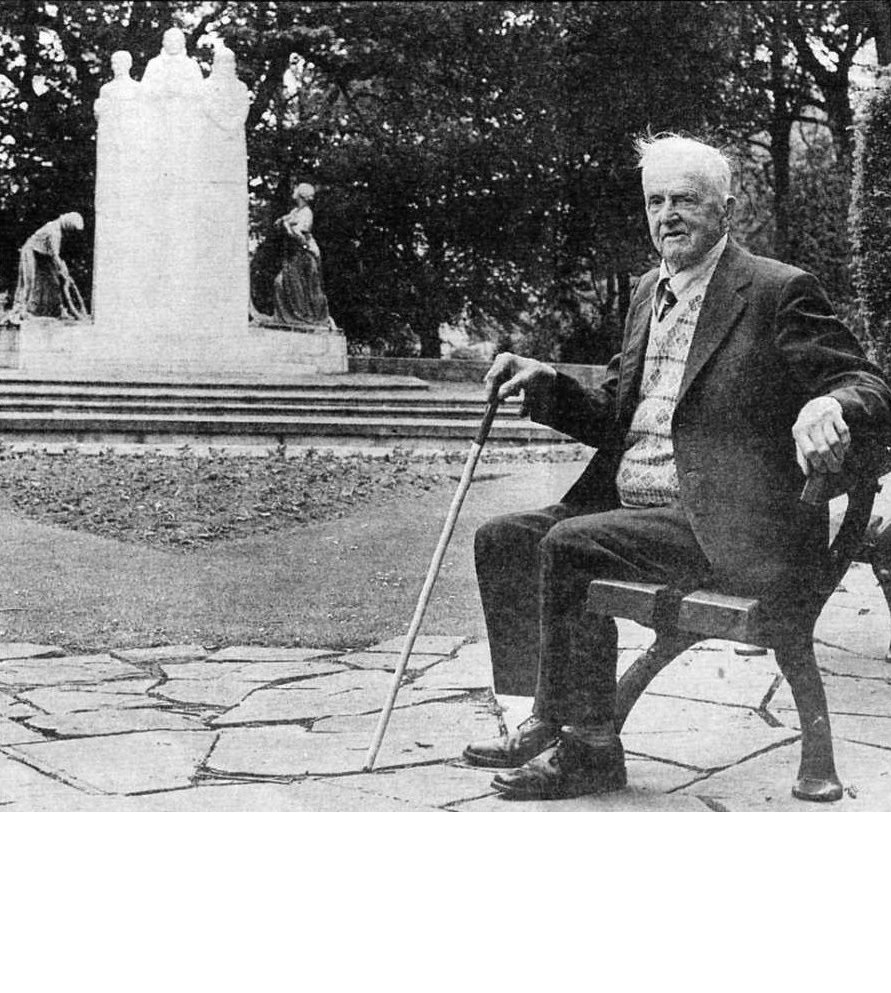 William Marshall died aged 101 in 1995. He was thought to be the last survivor of the “Accrington Pals.” William lived on Manchester Road at the time of the war. He was badly injured at the Somme, and witnessed the death of many of his friends. He wrote a poem, entitled ‘Pals’: There are tear-dimmed eyes in the town today There are lips to be no more kissed There are bosoms that swell with an aching heart, When they think Read more>> 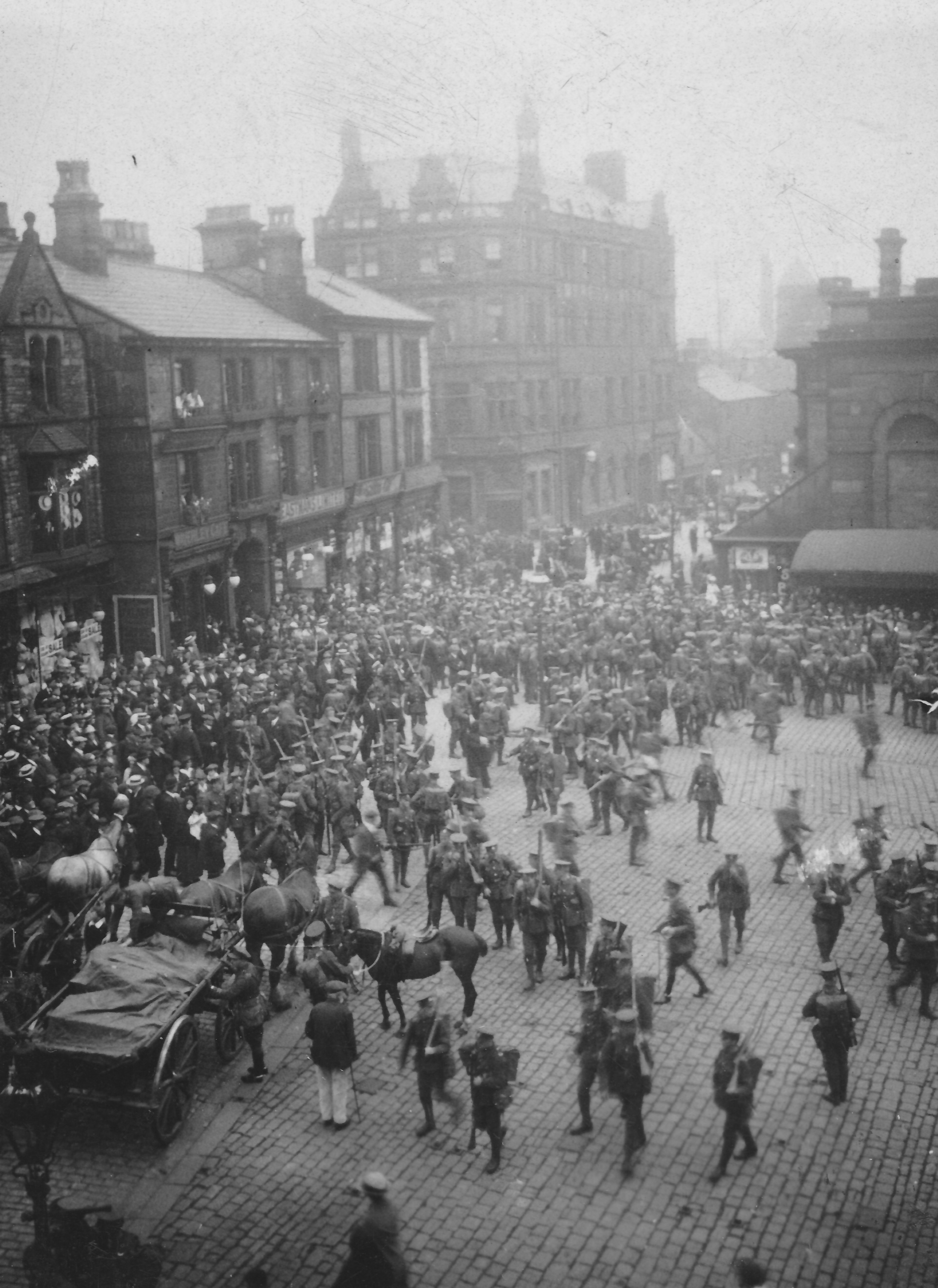 Formed at the start of the war, the 11th (Service) Battalion (Accrington) East Lancashire Regiment, better known as the Accrington Pals, was the product of the rush to arms when friends and colleagues joined in the ‘great adventure.’ The picture shows when the battalion stopped in Burnley en route to camp at Ripon. At the same time, still suffering from wounds, Harry Watson (c1892-1970) was presented with his Distinguished Conduct Medal to a thrilled crowd. 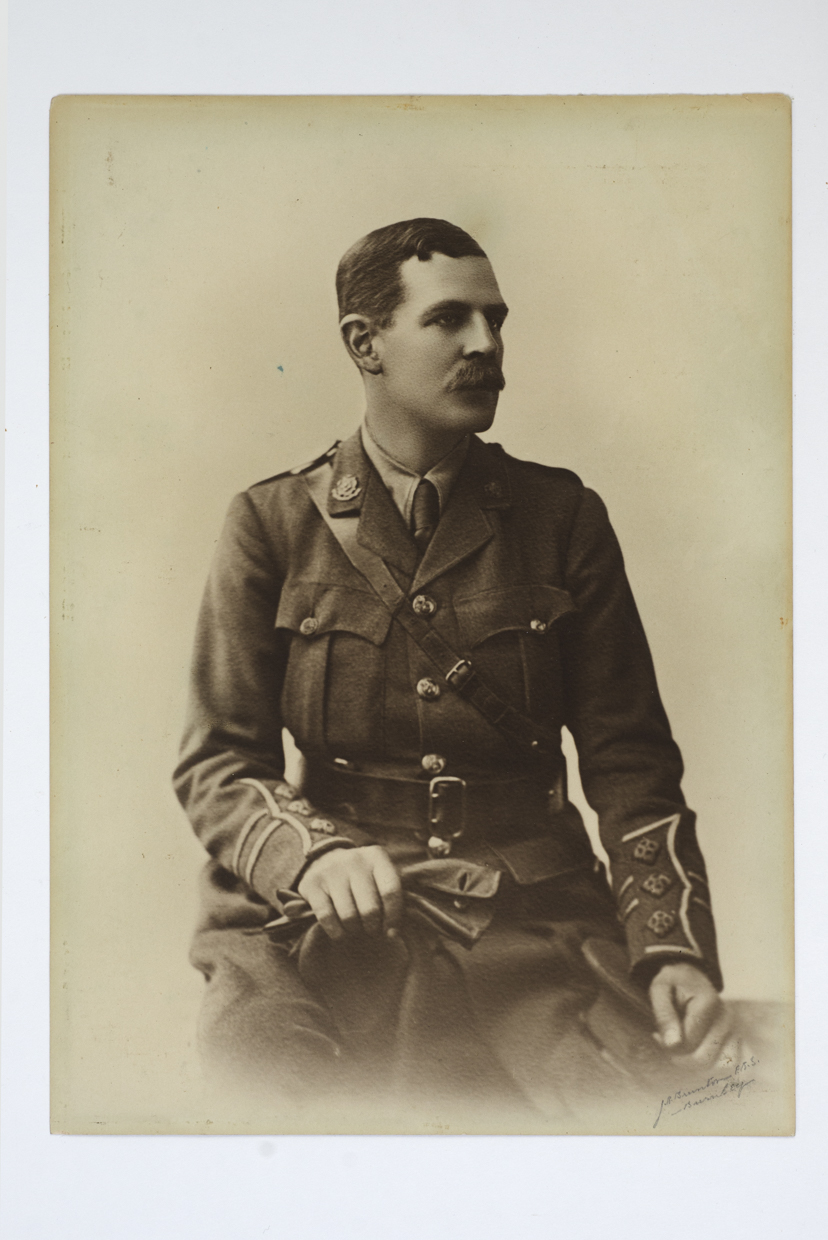 ‘Harry’ was the founder of Burnley Lads’ Club. The club gave working class boys the chance to improve their education through sport and study but also by experiencing life outside Burnley at camp. When Harry joined the Pals many of the club members followed him. He led the Burnley company when they attacked on the Somme, on 1st July. It soon became clear ‘Riley’s gone.’ Harry’s body was never found and he is commemorated on the Thiepval memorial. The club’s Read more>> 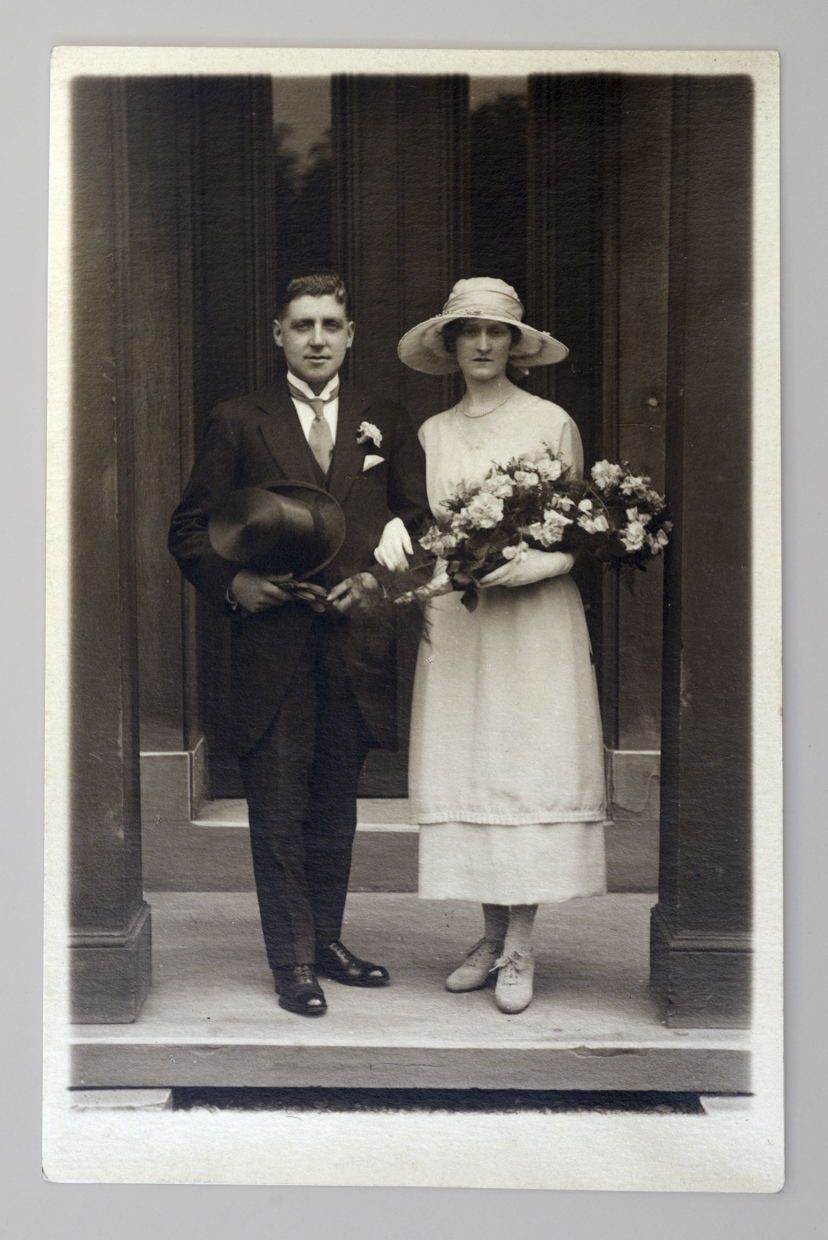 Sid came from Coventry. When he arrived in Burnley his first impression was not good. Then, whilst walking in Scott Park, he saw someone who was, he remarked to his landlady, “the girl I’m going to marry.” He was eventually introduced to Lily Whewell. He carried her photograph with him into battle on the Somme 1st July, 1916 where he was wounded when a shell splinter narrowly missed his brain.   Sid was also gassed in the war. He fulfilled Read more>> 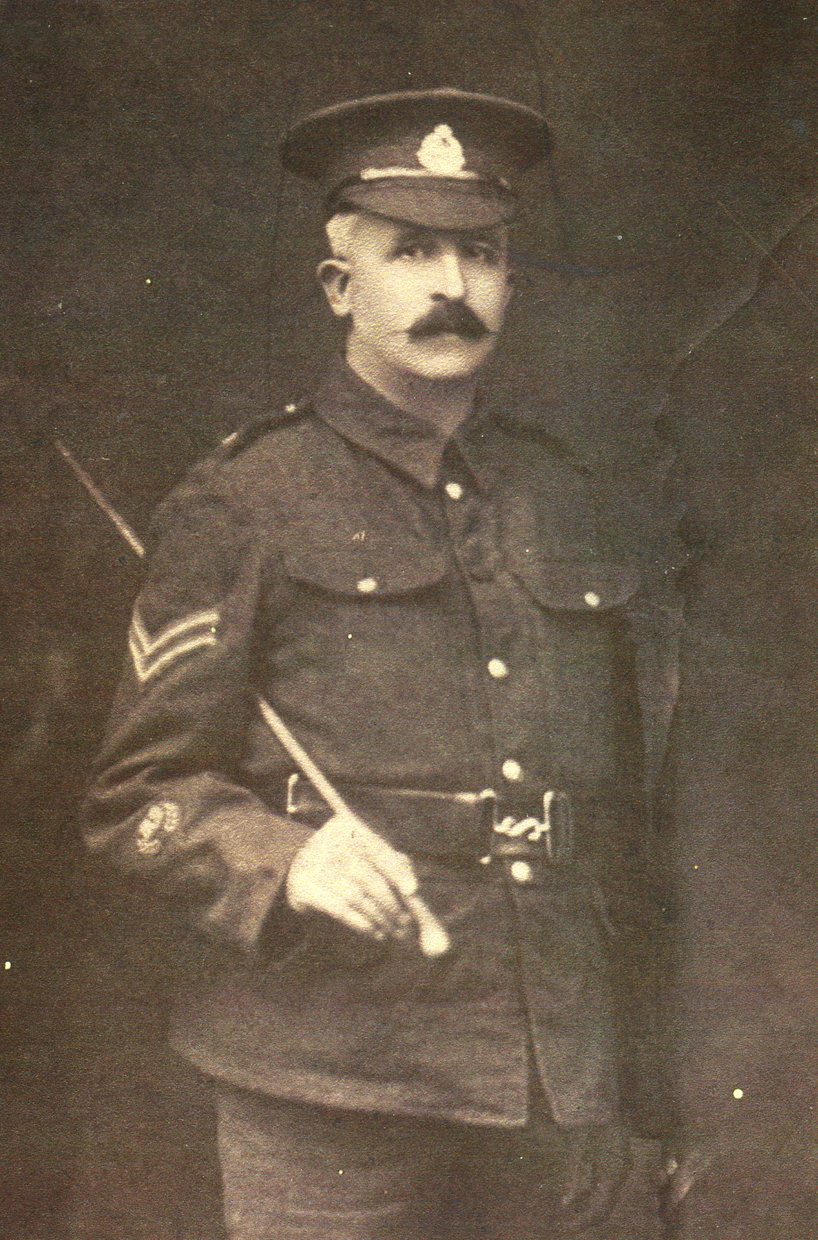 John was a native of Shropshire and the family moved to Burnley in 1908. He worked at a loom makers and, before joining the Pals, he was a watchmaker. He was listed missing in action 1st July, 1916. The postcard was sent to Norman, his son. John left a wife and seven children. 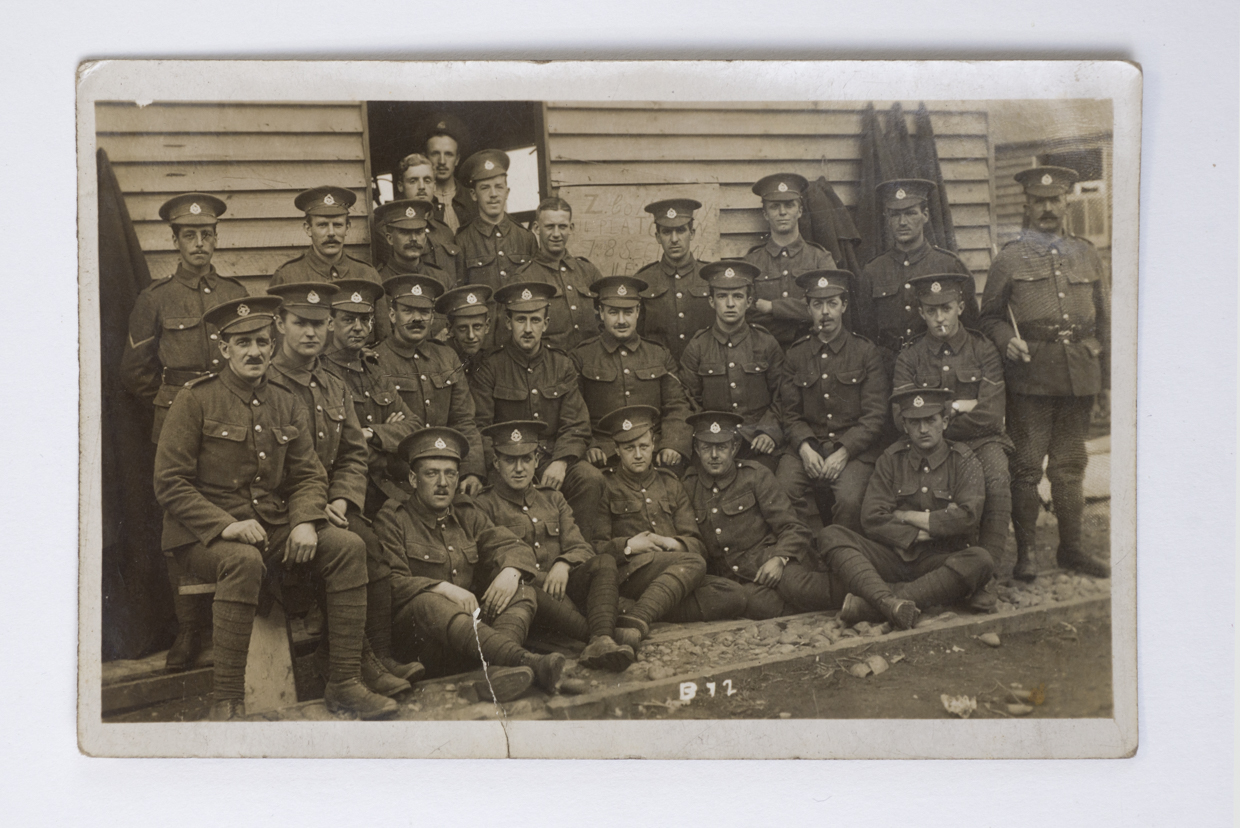 Formed at the start of the war, the 11th (Service) Battalion (Accrington) East Lancashire Regiment, better known as the Accrington Pals, was the product of the rush to arms when friends and colleagues joined in the “great adventure.” Burnley contributed about a quarter of its strength. Taken at Penkridge Bank camp in 1915, the group photograph includes (front row, starting second left) Sid Edwards, Harry Platt, Harry Proctor and Fred Ashworth. John Davies is standing far right. All saw action Read more>>