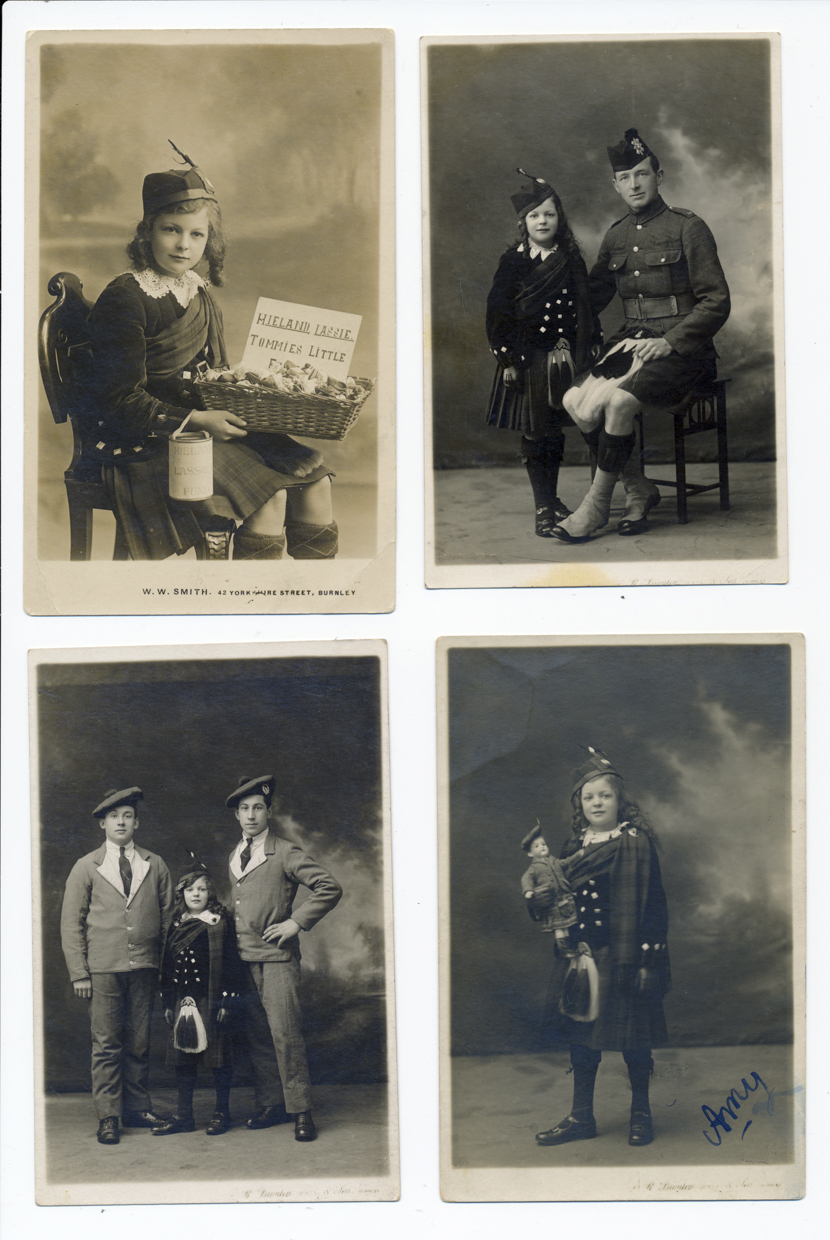 Amy, who became known as ‘Highland Lassie,’ began collecting money for the war effort with her mother in October 1914. Later, dressed in Black Watch Highland Dress, she collected money in St James Street every Saturday. The money provided “comfort” parcels of cigarettes, biscuits and chocolate for Burnley men serving overseas. During the war, over 4,000 parcels were sent to local men. In 1917, she began collecting for St. Dunstan’s for blind servicemen and women in what became a long Read more>> 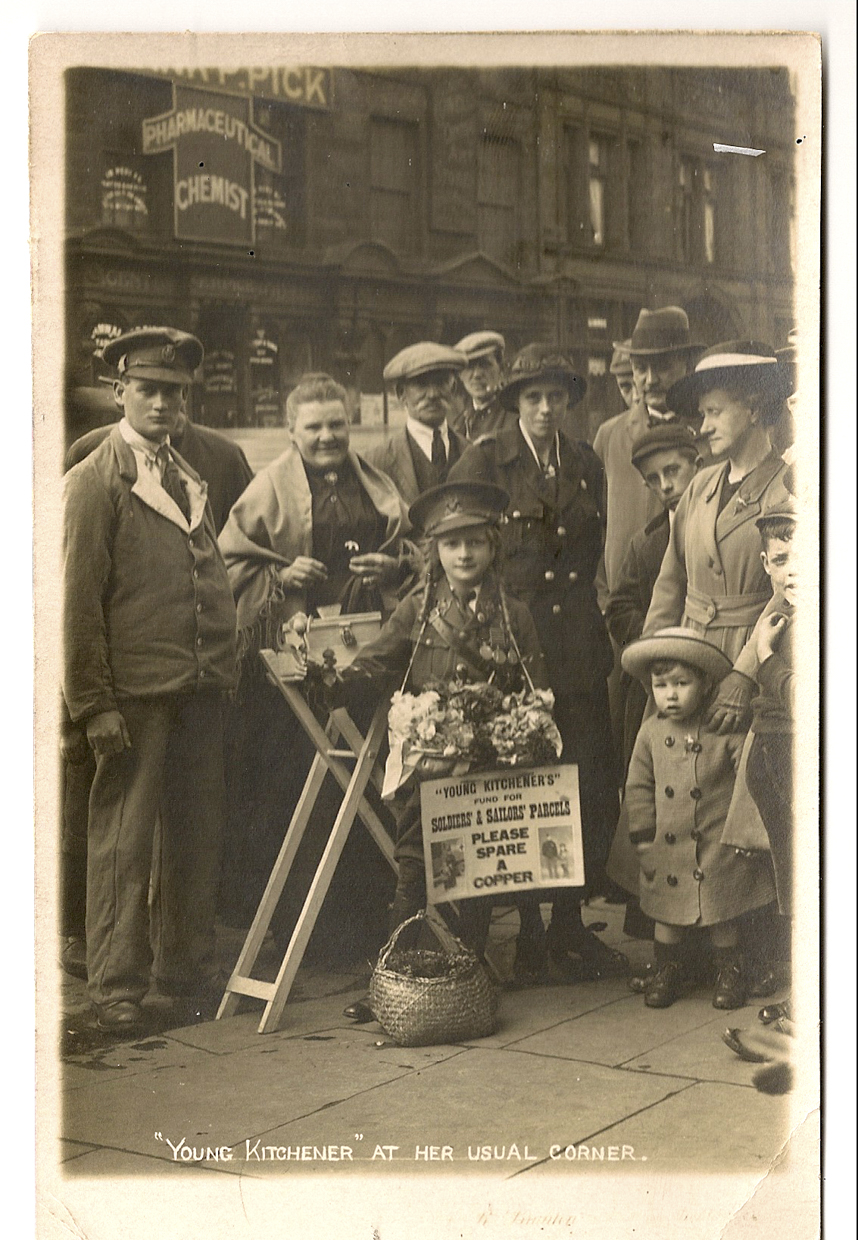 Jennie’s mother inspired her daughter to become a fundraiser. She was given special permission to dress as “Kitchener”. Lord Horatio Kitchener was the Secretary of State for War. She was regularly seen collecting on St James Street and her greatest achievement was raising funds for the purchase of a motor ambulance. One of her brothers was killed in action. A second was awarded the Military Medal and bar. Jennie was the only child to attend London’s victory parade in 1919. Read more>> 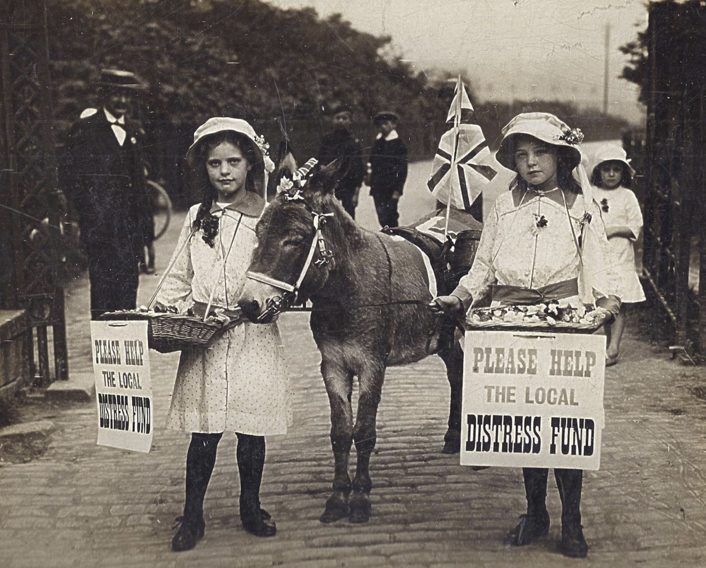 Sisters Hilda (left) and Joyce were photographed with their pet donkey Jinny at Hanbrig Castle, the entrance to Towneley Park, in September 1914. They were collecting money for a local distress fund. It was estimated that 18,000 were unemployed in the town. There were many “harrowing stories of want” made worse because so many men had rushed to join the forces. The Crain family lived at Causeway End Farm, Towneley. William, the only son of the farming family, was killed Read more>> 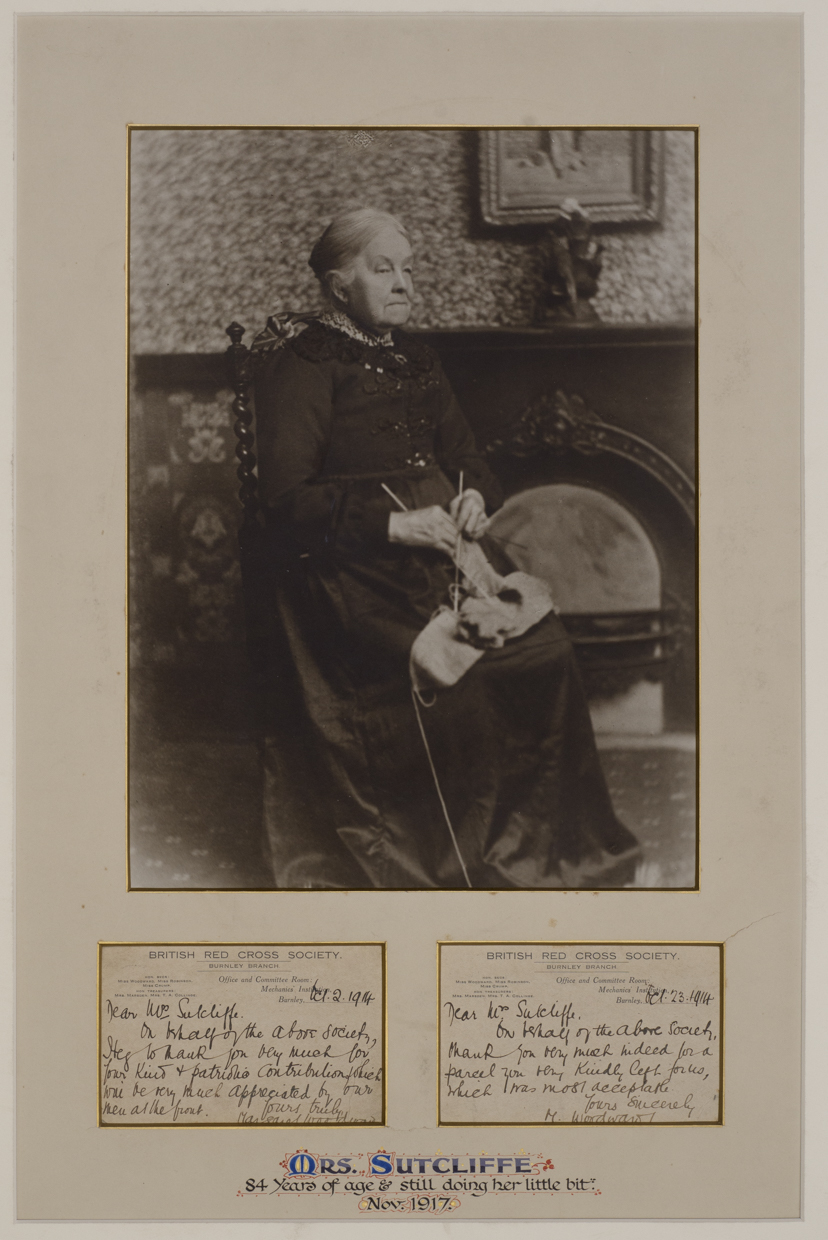 Postcards showing Mrs Sutcliffe doing her “little bit” for the war effort were sold. Testimonials praising her sock knitting efforts- an essential for many on the front line- were also published. Everyone could help with the war effort. 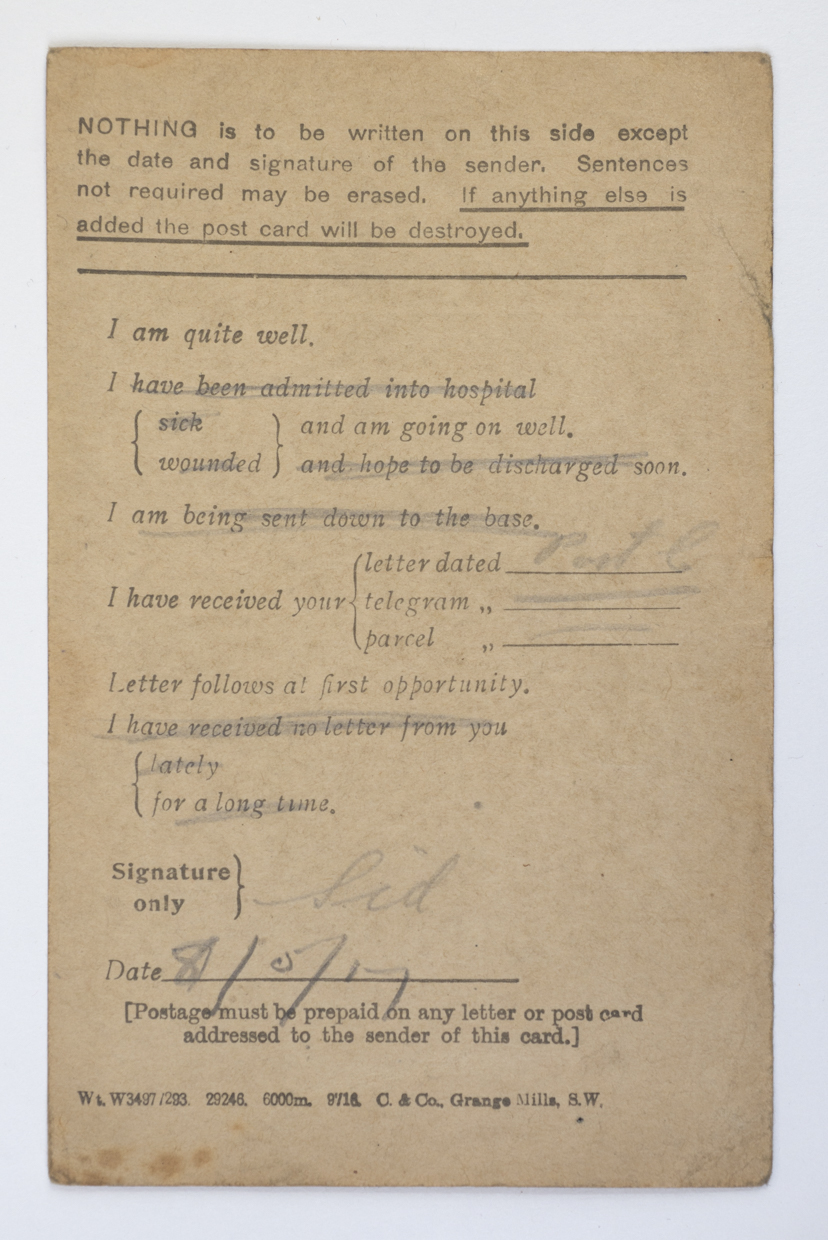 Field Service postcard. The cards were used to send a short message home without the need for the message to be censored, providing reassurance for those at home. The card was sent by Burnley born Victoria Cross winner Hugh Colvin. Hugh was born in Rosegrove. A commemorative stone was laid in Burnley in 2017. 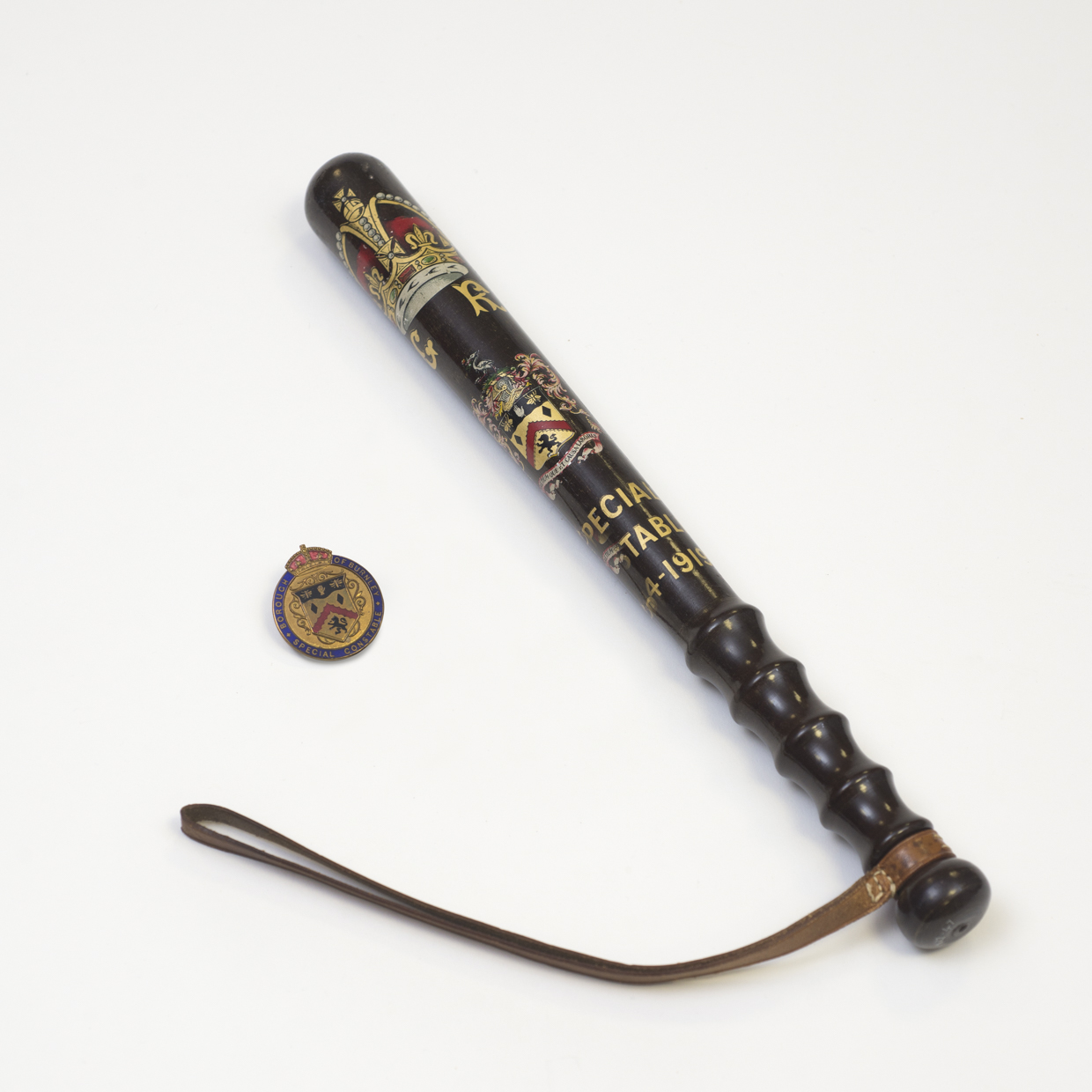 William Dent Whitaker was one of the 48 special constables sworn in by Burnley Borough magistrates 13th October, 1914. These replaced regular police officers who had volunteered for military service. His son John enlisted and between 1914 and 1920 William corresponded with him regularly, sending a total of 1200 picture postcards. The postcards describe life on the home front and accounts of “bobbying” in Burnley. Although some of the accounts are quite humorous, William took his police duties very seriously, Read more>>